EITC/WD/WPF WordPress Fundamentals Certification is an EU based IT competencies attestment in focused professional digital skillset of circa 15 hours reference programme equivalence.

This European IT Certification can be ordered separately or as a part of the EITCA/WD Web Development Academy with a set of other topically aligned EITC programmes.

Curriculum of the EITC/WD/WPF WordPress Fundamentals Certification covers range of relevant state-of-the-art topics organized in sections, providing attestment of your profesional skills (refer to the details in the Certification Curriculum tab above).

To acquaint yourself with the details on implementing of the EITC/WD/WPF WordPress Fundamentals Certification and its recognition please visit the How It Works section.

By enroling for the European Information Technologies Certification EITC/WD/WPF WordPress Fundamentals you will have access to the complete didactic programme corresponding to the Certification Curriculum and the relevant examination procedure implemented fully remotely (with free additional retakes if required). Upon successful passing of the EITC/WD/WPF examination a verifiable personalized EITC Certification will be issued in your name from Brussels under governance of the European Information Technologies Certification Institute EITCI, the accreditation and certification body for the programme. For all the details on the certification procedure please refer to How It Works section.

To review the indicative programme of the EITC/WD/WPF WordPress Fundamentals Certification, please click on the Certification Curriculum tab above.

You can enrol in the EITC/WD/WPF WordPress Fundamentals Certification by adding it to your order above. The EITC Certification accompanying didactic process will be an integrated auxilary service to help you define prerequsities and provide a complete curriculum for your EU based competencies and skills attestment. 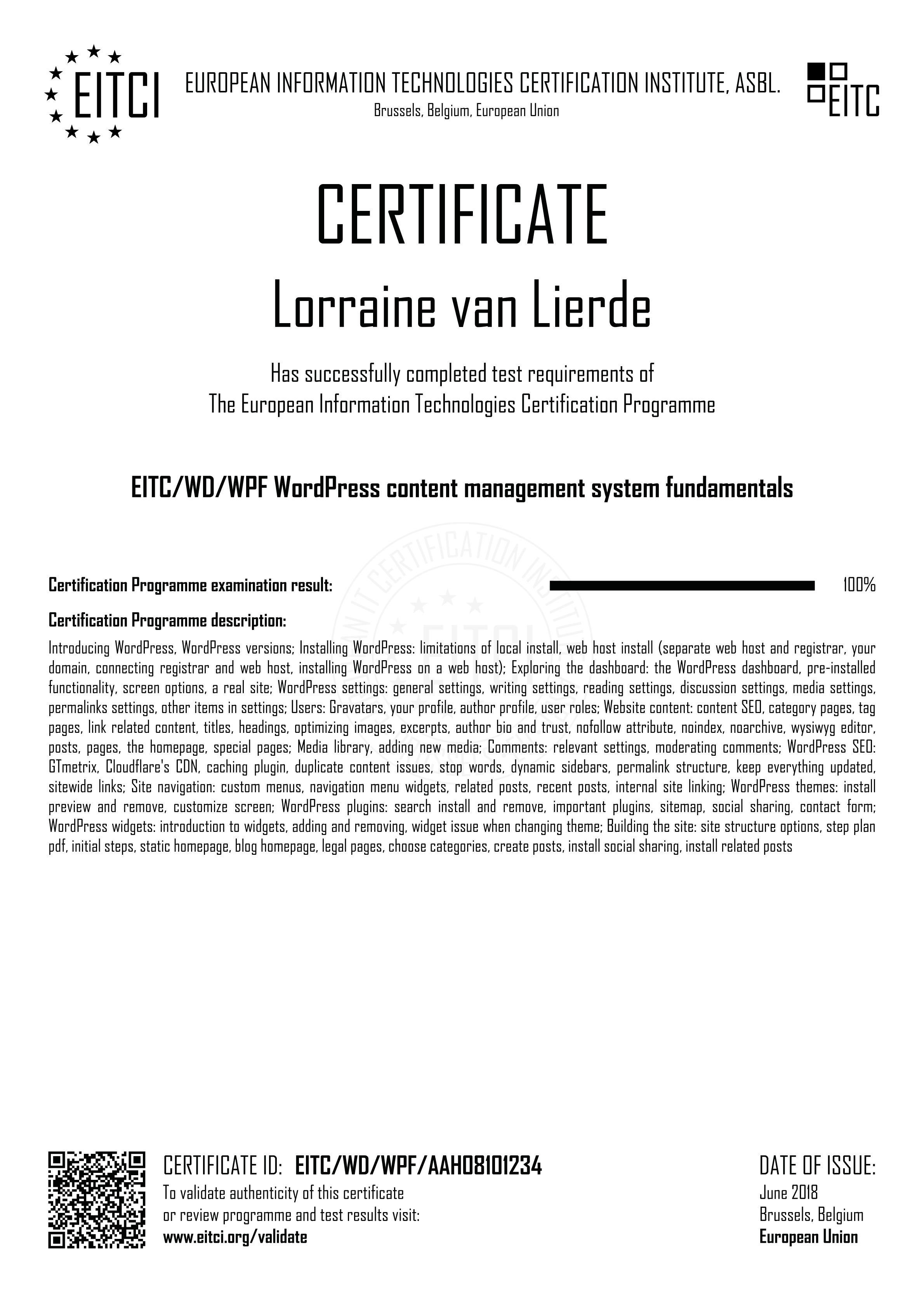 EITC/WD/WPF WordPress Fundamentals is the European IT Certification programme in web development focused on building and managing web sites in one of the most popular and versatile Content Management Systems – WordPress.

The curriculum of the EITC/WD/WPF WordPress Fundamentals focuses on creating and managing advanced web sites with the open source Content Management System called WordPress (currently powering majority of dynamic web sites in the Internet) organized within the following structure, encompassing comprehensive video didactic content as a reference for this EITC Certification.

WordPress was released on May 27, 2003, by its founders, American developer Matt Mullenweg and English developer Mike Little, as a fork of b2/cafelog. The software is released under the GPLv2 (or later) license.

To function, WordPress has to be installed on a web server, either part of an Internet hosting service like WordPress.com or a computer running the software package WordPress.org in order to serve as a network host in its own right. A local computer may be used for single-user testing and learning purposes.

“WordPress is a factory that makes webpages” is a core analogy designed to clarify the functions of WordPress: it stores content and enables a user to create and publish webpages, requiring nothing beyond a domain and a hosting service.

WordPress has a web template system using a template processor. Its architecture is a front controller, routing all requests for non-static URIs to a single PHP file which parses the URI and identifies the target page. This allows support for more human-readable permalinks.

Prior to version 3, WordPress supported one blog per installation, although multiple concurrent copies may be run from different directories if configured to use separate database tables. WordPress Multisites (previously referred to as WordPress Multi-User, WordPress MU, or WPMU) was a fork of WordPress created to allow multiple blogs to exist within one installation but is able to be administered by a centralized maintainer. WordPress MU makes it possible for those with websites to host their own blogging communities, as well as control and moderate all the blogs from a single dashboard. WordPress MS adds eight new data tables for each blog. As of the release of WordPress 3, WordPress MU has merged with WordPress.

From a historic perspective, b2/cafelog, more commonly known as b2 or cafelog, was the precursor to WordPress. The b2/cafelog was estimated to have been installed on approximately 2,000 blogs as of May 2003. It was written in PHP for use with MySQL by Michel Valdrighi, who is now a contributing developer to WordPress. Although WordPress is the official successor, another project, b2evolution, is also in active development. WordPress first appeared in 2003 as a joint effort between Matt Mullenweg and Mike Little to create a fork of b2. Christine Selleck Tremoulet, a friend of Mullenweg, suggested the name WordPress. In 2004 the licensing terms for the competing Movable Type package were changed by Six Apart, resulting in many of its most influential users migrating to WordPress. By October 2009 the Open Source CMS MarketShare Report concluded that WordPress enjoyed the greatest brand strength of any open-source content management system. As of March 2021, WordPress is used by 64.5% of all the websites whose content management system is known. This is 40.5% of the top 10 million websites.

The EITC/WD/WPF WordPress Fundamentals Certification Curriculum references open-access didactic materials in a video form. Learning process is divided into a step-by-step structure (programmes -> lessons -> topics) with examination preparations supported by partial quizes included into each curriculum referenced learning step. Unlimited consultancy with domain experts are also provided.
All EITC Certification orders are subject to one month full money back guarantee. For details on Certification check How it Works. 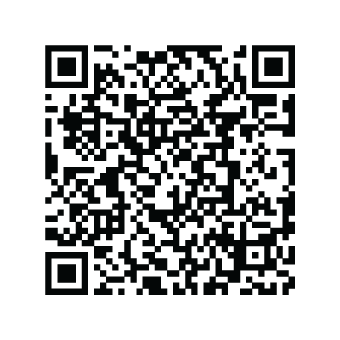 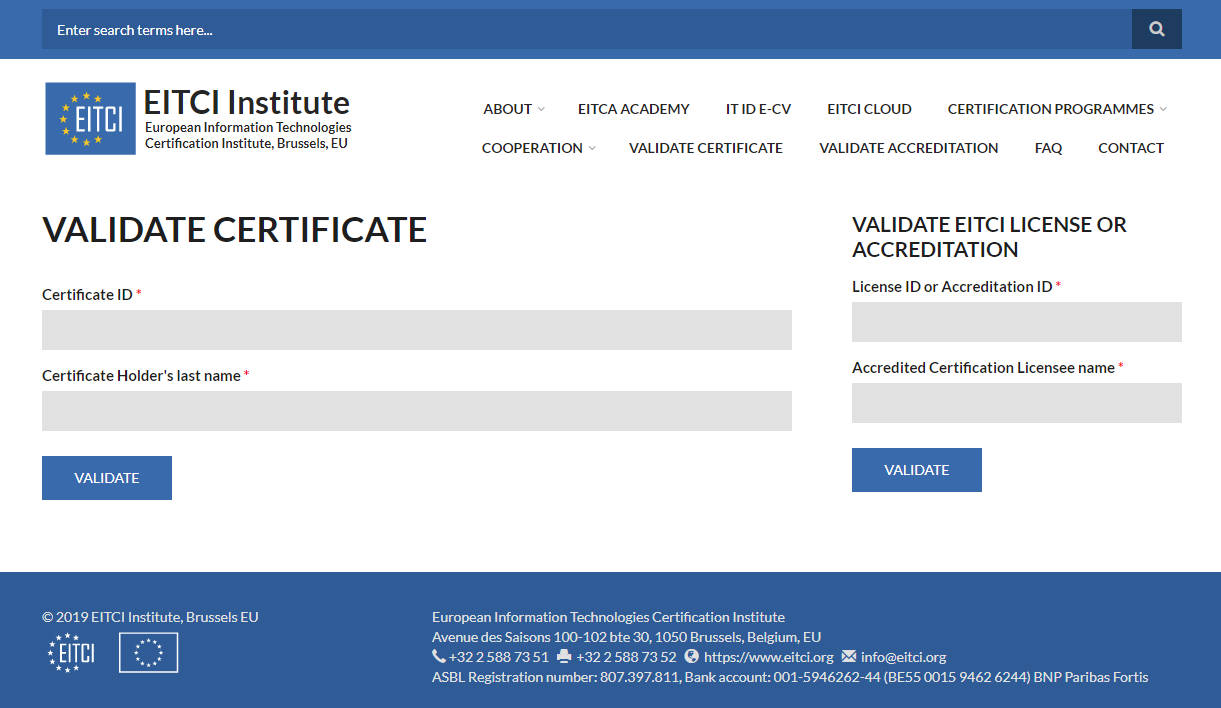 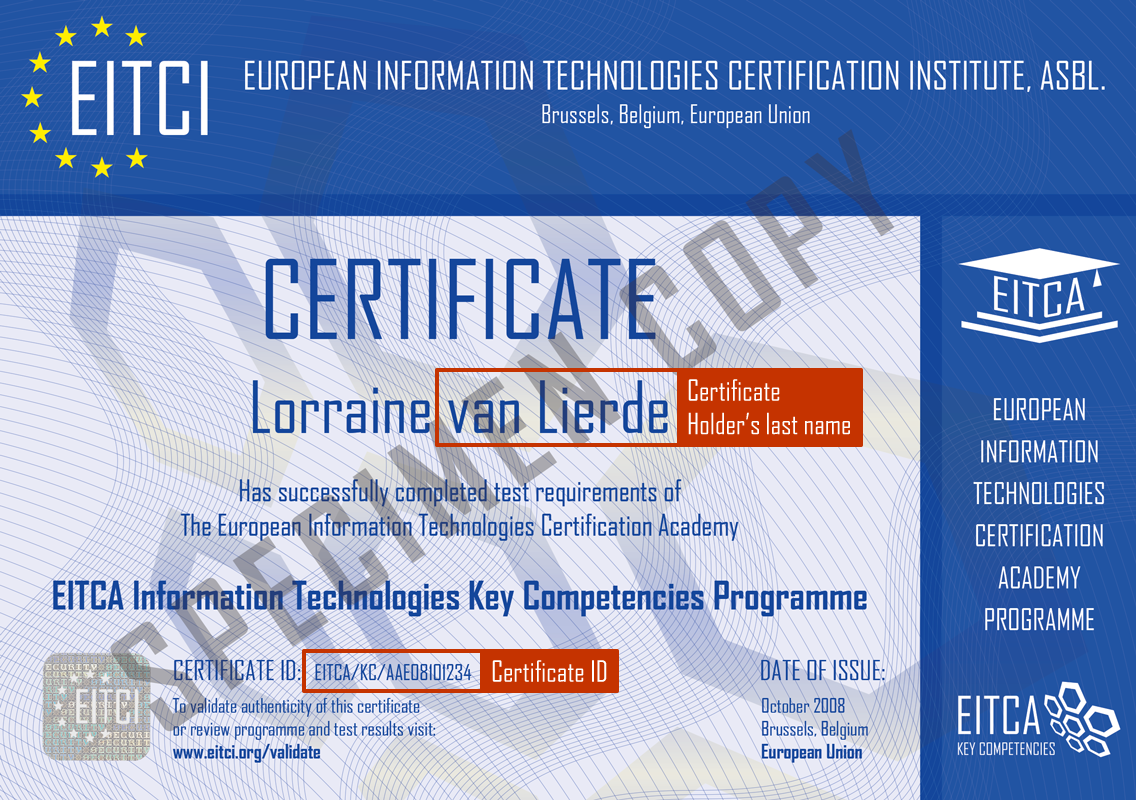 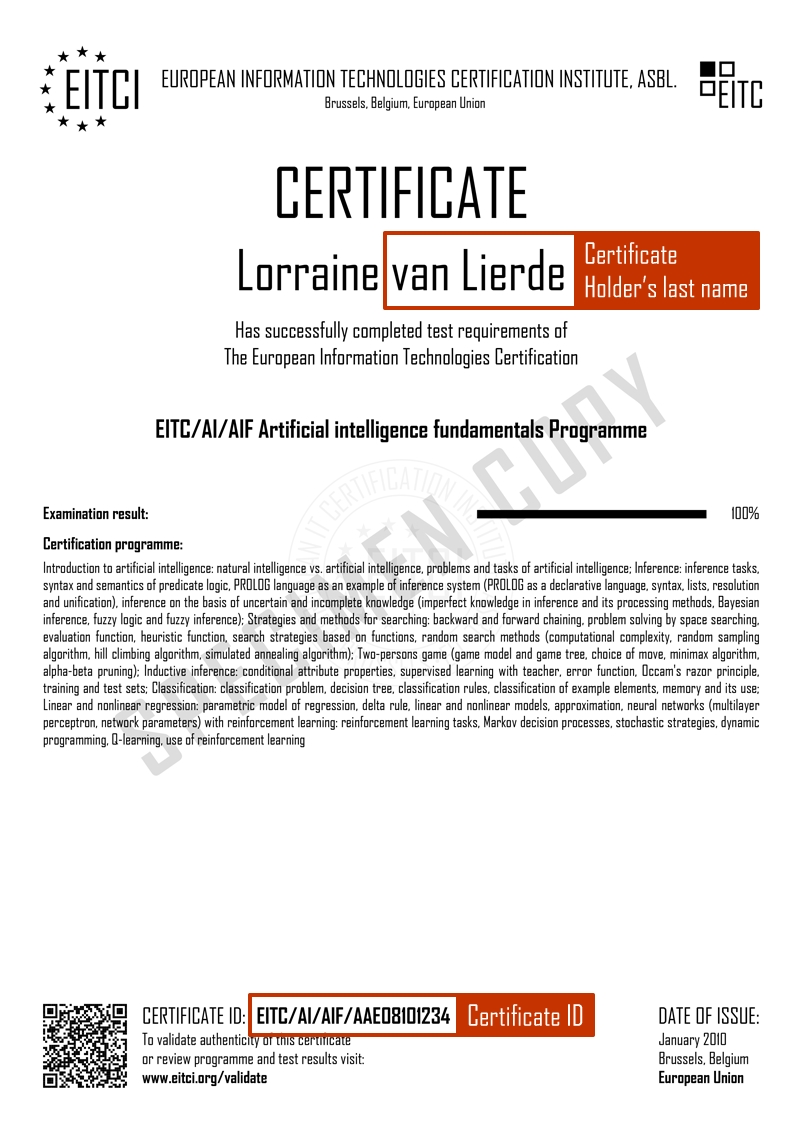