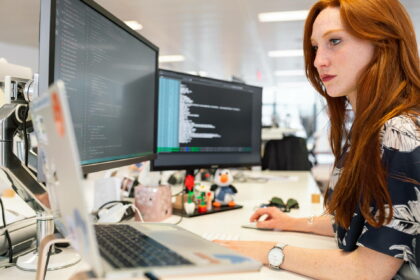 EITC/WD/JSF JavaScript Fundamentals is the European IT Certification programme on the fundamentals of JavaScript web sites programming language.

The curriculum of the EITC/WD/JSF JavaScript Fundamentals focuses on practical skills in JavaScript web sites programming organized within 15 sections, encompassing comprehensive video didactic content as a reference for this EITC Certification.

JavaScript is a programming language enabling interactive web pages development and is considered to be an essential part of modern web applications. Alongside HTML and CSS, JavaScript is one of the core technologies of the World Wide Web. The vast majority of websites use it for client-side page behavior, and all major web browsers have a dedicated JavaScript engine to execute it. As a multi-paradigm language, JavaScript supports event-driven, functional, and imperative programming styles. It has application programming interfaces (APIs) for working with text, dates, regular expressions, standard data structures, and the Document Object Model (DOM). Although there are similarities between JavaScript and Java, including language name, syntax, and respective standard libraries, the two languages are distinct and differ significantly in design. JavaScript engines were originally used only in web browsers, but they are now core components of other runtime systems, such as Node.js and Deno. These systems are used to build servers and are also integrated into frameworks, such as Electron and Cordova, for creating a variety of applications.

JavaScript, often abbreviated as JS, is a programming language that conforms to the ECMAScript specification. JavaScript is high-level, often just-in-time compiled, and multi-paradigm. It has curly-bracket syntax, dynamic typing, prototype-based object-orientation, and first-class functions.

The ECMAScript standard does not include any input/output (I/O), such as networking, storage, or graphics facilities. In practice, the web browser or other runtime system provides JavaScript APIs for I/O.

The Mosaic web browser was released in 1993. As the first browser with a graphical user interface accessible to non-technical people, it played a prominent role in the rapid growth of the nascent World Wide Web. The lead developers of Mosaic then founded the Netscape corporation, which released a more polished browser, Netscape Navigator, in 1994. Navigator quickly became the most used browser. During these formative years of the Web, web pages could only be static, lacking the capability for dynamic behavior after the page was loaded in the browser. There was a desire in the burgeoning web development scene to remove this limitation, so in 1995, Netscape decided to add a scripting language to Navigator. They pursued two routes to achieve this: collaborating with Sun Microsystems to embed the Java programming language, while also hiring Brendan Eich to embed the Scheme language. Netscape management soon decided that the best option was for Eich to devise a new language, with syntax similar to Java and less like Scheme or other extant scripting languages. Although the new language and its interpreter implementation were officially called LiveScript when first shipped as part of a Navigator release in September 1995, the name was changed to JavaScript three months later. The choice of the JavaScript name has caused confusion, sometimes giving the impression that it is a spin-off of Java. Since Java was the hot new programming language at the time, this has been characterized as a marketing ploy by Netscape to give its own new language cachet.

Microsoft debuted Internet Explorer in 1995, leading to a browser war with Netscape. On the JavaScript front, Microsoft reverse-engineered the Navigator interpreter to create its own, called JScript. JScript was first released in 1996, alongside initial support for CSS and extensions to HTML. Each of these implementations was noticeably different from their counterparts in Navigator. These differences made it difficult for developers to make their websites work well in both browsers, leading to widespread use of “best viewed in Netscape” and “best viewed in Internet Explorer” logos for several years.

In November 1996, Netscape submitted JavaScript to ECMA International, as the starting point for a standard specification that all browser vendors could conform to. This led to the official release of the first ECMAScript language specification in June 1997.

The standards process continued for a few years, with the release of ECMAScript 2 in June 1998 and ECMAScript 3 in December 1999. Work on ECMAScript 4 began in 2000.

Meanwhile, Microsoft gained an increasingly dominant position in the browser market. By the early 2000s, Internet Explorer’s market share reached 95%. This meant that JScript became the de facto standard for client-side scripting on the Web.

Microsoft initially participated in the standards process and implemented some proposals in its JScript language, but eventually it stopped collaborating on ECMA work. Thus ECMAScript 4 was mothballed.

During the period of Internet Explorer dominance in the early 2000s, client-side scripting was stagnant. This started to change in 2004, when the successor of Netscape, Mozilla, released the Firefox browser. Firefox was well received by many, taking significant market share from Internet Explorer. In 2005, Mozilla joined ECMA International, and work started on the ECMAScript for XML (E4X) standard. This led to Mozilla working jointly with Macromedia (later acquired by Adobe Systems), who were implementing E4X in their ActionScript 3 language, which was based on an ECMAScript 4 draft. The goal became standardizing ActionScript 3 as the new ECMAScript 4. To this end, Adobe Systems released the Tamarin implementation as an open source project. However, Tamarin and ActionScript 3 were too different from established client-side scripting, and without cooperation from Microsoft, ECMAScript 4 never reached fruition.

Meanwhile, very important developments were occurring in open-source communities not affiliated with ECMA work. In 2005, Jesse James Garrett released a white paper in which he coined the term Ajax and described a set of technologies, of which JavaScript was the backbone, to create web applications where data can be loaded in the background, avoiding the need for full page reloads. This sparked a renaissance period of JavaScript, spearheaded by open-source libraries and the communities that formed around them. Many new libraries were created, including jQuery, Prototype, Dojo Toolkit, and MooTools.

Google debuted its Chrome browser in 2008, with the V8 JavaScript engine that was faster than its competition. The key innovation was just-in-time compilation (JIT), so other browser vendors needed to overhaul their engines for JIT.

In July 2008, these disparate parties came together for a conference in Oslo. This led to the eventual agreement in early 2009 to combine all relevant work and drive the language forward. The result was the ECMAScript 5 standard, released in December 2009.

Ambitious work on the language continued for several years, culminating in an extensive collection of additions and refinements being formalized with the publication of ECMAScript 6 in 2015. The draft specification is currently maintained openly on GitHub, and ECMAScript editions are produced via regular annual snapshots. Potential revisions to the language are vetted through a comprehensive proposal process. Now, instead of edition numbers, developers check the status of upcoming features individually.

The current JavaScript ecosystem has many libraries and frameworks, established programming practices, and increased usage of JavaScript outside of web browsers. Plus, with the rise of single-page applications and other JavaScript-heavy websites, a number of transpilers have been created to aid the development process.